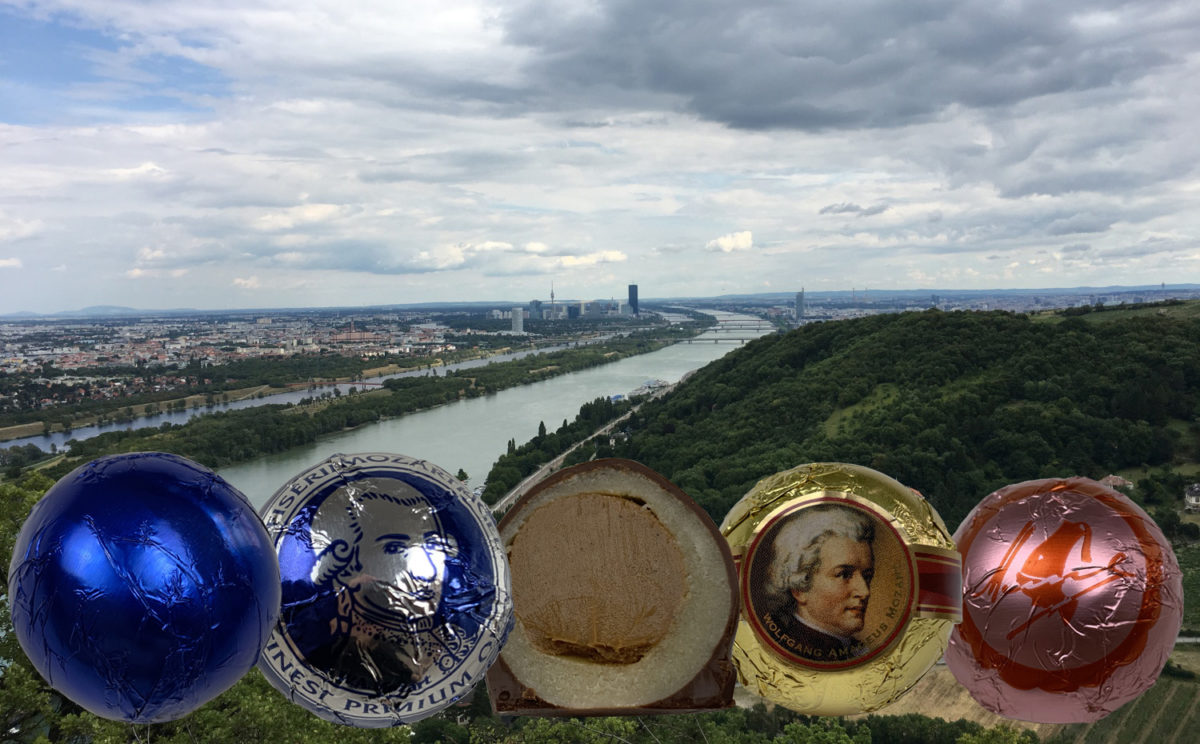 The map above (open large version here) gives you an overview of the tour. The start point is the Vienna State Opera, but you could also do a different route depending on where you are. Pass by the opera on the right side and you almost immediately run into the first Mozartkugel store.

These are factory-made Mozartkugeln, but since you’re already passing by the shop I might as well mention it here: The Lindt store at Kärntner Straße 53. They offer two variations: Blue or red wrapped Mozartkugeln. The only difference between those two is the outer coating which is either milk chocolate (blue) or dark chocolate (red). If you want to go further down the rabbit hole you can also get either a Lindt branded version of them or the classic Hofbauer. However, the content stays the same.

Only a few steps from your last stop, at Kärntner Straße 51, you find the first hand-made Mozartkugeln of this tour. The K. u. K. Hofzuckerbäcker Gerstner offers them in an unmarked blue wrapping in their store and they contain a lot of Marzipan.

Another Bonus, as you continue down the big shopping street in the direction of the Stephansplatz you pass by the Heindl Store at Kärntner Straße 35. Industrial-made and available at many supermarkets, you can buy this Mozartkugel right here at the source. They also have a round variation of their Mozartkugel, offering the same content as the other more common one just in a slightly different form. Don’t worry if you missed this store or if it’s closed, you can also find another one at Stephansplatz (or actually at many places throughout the city).

The blue-wrapped hand-made Mozartkugel by Chocolada is available in many tourist places but since you’re already in the vicinity you can also try Billa Corso. Close to Stephansplatz and only a few steps from the Kärntner Straße in the Kupferschmiedgasse you can find the store (the full address being Neuer Markt 17). The Chocolada Mozartkugeln are a little bit more hidden from the main batch near the elevator and if you’re lucky you can also get the pink summer edition. Additionally, this might be a good place to stack up on other more common industrial-made Mozartkugeln from Mirabell, Reber or Victor Schmidt / Manner.

Return to the Kärntner Straße and follow it all the way to Stephansplatz. Keep to the right side and go by the Stephansdom, on the backside of the cathedral you can find the next Mozartkugel. It’s another handmade one by Haas & Haas at Stephansplatz 4. This one is sold in small packages since it’s not wrapped.

Turn around and go back in the direction you came from. On the other side of the Stephansplatz go straight into the small street next to the Haas Haus (Goldschmiedgasse). Follow this small street and turn right at the first chance, to get to Leschanz at Freisingergasse 1. This is another hand-made Mozartkugel that contains not just Marzipan, but also different kinds of nougat.

Meinl’s Mozartkugel at Meinl am Graben

The last stop is quite close, continue down the street from your last stop, keep left and pass by another church (St. Peter, which you should visit while you’re already here). Hitting a bigger street, called “Graben”, head right and straight to the end of the street where you can already see a big building: Meinl am Graben (at Graben 19). They offer many different industrial-made Mozartkugeln but also their own handmade ones.

This concludes the Mozartkugel tour of Vienna. Especially the industrial-made ones are usually available in almost every bigger store in Vienna. However, the hand-made ones mentioned above are only available at their respective store (with a few exceptions, but are you really such a big fan to hunt all over Vienna and the airport for Mozartkugeln?). If you can’t get enough of Mozartkugeln you can also check out the article about Salzburg and where the get Mozartkugeln or browse trough the full list of all Mozartkugeln I discovered so far.

4 thoughts on “Where to buy Mozartkugeln in Vienna”