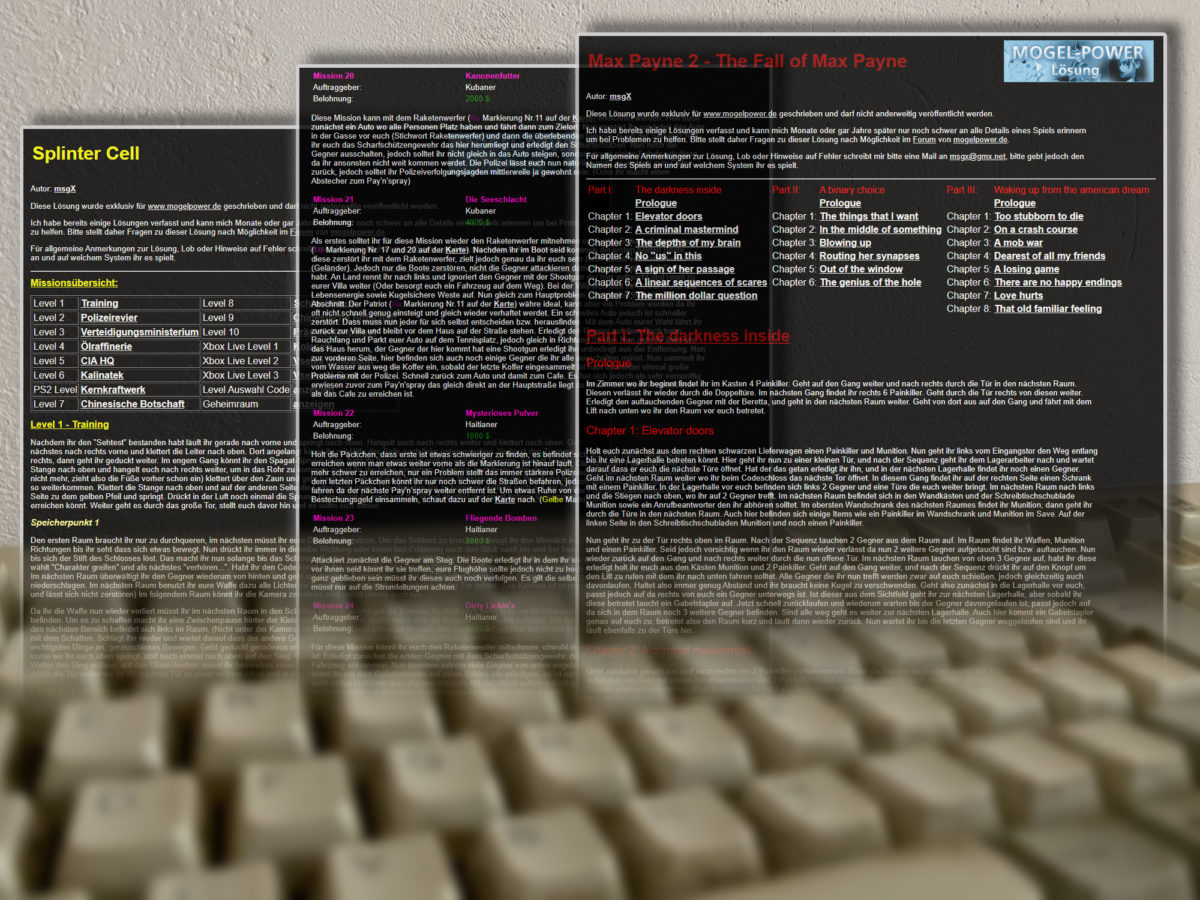 I used to write walkthroughs for video games. Even though this never became my full-time job, it did influence some of my career choices. Back in the days – I was still in school – writing guides was at first more an elaborate hobby. But don’t get me wrong, right from the start it was not just satisfying to solve tricky passages in games, but also sharing this information with other gamers.

My first full walkthrough was for the stealth game Splinter Cell. I did write some shorter guides before, but in this case, I covered for the first time the whole game. Being a stealth game, Splinter Cell requires the player to remain unseen in the shadows, hiding bodies of defeated enemies and sometimes even prohibiting the use of weapons. To give you an example: A few levels of the game only allow three alarms, so only three poorly hidden bodies could lead to a Game Over (meaning you may have to do the whole level again due to the structure and checkpoint system of the game). Some of the more delicate missions even require absolute stealth, otherwise hostages are killed which leads to another Game Over. You can easily see how a guide could help out, describing when to attack the enemies and where to hide their bodies.

This game also taught me an important lesson about reproducibility. The things I describe in my walkthrough need to be feasible for a great variety of players; just because something worked for me once, doesn’t mean it works for everybody. So let’s say after around ten or more retries I manage to sneak by an enemy to enter a server room. That kind of strategy is hardly feasible for a walkthrough, even though it might be tempting to describe the full stealth route.

Being my first “big” work, I continued to improve the Splinter Cell walkthrough over the years. Later I added the Xbox Live exclusive levels and a mission only included in the Playstation 2 version of the game.

Even in my early days, I quickly started to write as many walkthroughs as possible, covering games like Shenmue 2, Halo 2, Fable, and Max Payne 2. Most of my (web-based) walkthroughs were published on mogelpower.de, except some of my earliest work, which I later re-released on Mogelpower. Since I wrote my walkthroughs in a word processor, they still needed to be converted to a website. Using the (back then static) online documentation Selfhtml I taught myself some rudimentary HTML and CSS.

Sadly I also used my new knowledge for some eye-breaking colorful design experiments, for example, the walkthrough for Wreckless – The Yakuza Missions. The game is packed with visual effects, so the idea was to translate this into the visuals for the walkthrough (probably only true for the dazzling attributes). Jet Set Radio Future was in comparison very discreet, the background color of the guide was oriented on the color scheme of the loading screen of the game.

In 2004 I wrote my first walkthrough for a GTA game, in this case for the Xbox version of GTA Vice City. The extensive guide covers all story and side missions. Something I repeated the same year for the next entry of the series, GTA San Andreas. Both walkthroughs list all requirements to get 100% completion, for Vice City I even included a map of all the hidden packages in the game and where to find the best items and cars. This probably also started a somewhat tradition for me, I did write a walkthrough for almost every Grand Theft Auto game released since then. Of course, it also helps that those games are very popular, resulting in a higher demand for walkthroughs.

Speaking of game series that accompanied me through my time as a walkthrough writer, also in 2004, I wrote a guide for the second Splinter Cell game, Pandora’s Tomorrow. As you can see by now, the title of this article is a bit misleading, I also cover some of my work from 2004.

Some tough games, or Ninja Gaiden and Driver 3

Packing over 20 bosses, Ninja Gaiden is not suited for impatient gamers. Already the first boss requires the mastery of a certain technique and prohibits the use of other attacks. At least later in the game, it is possible to farm currency for the in-game shop to buy up all health items and make it through some of the rather grueling boss parades. Having a guide greatly helps in preparing for this kind of challenge.

Another game with a very low error margin was Driver 3. I will probably never forget the beginning of Mission 23 The Chase. You start with your car in the wrong direction, must do a quick 180 turnaround, and brute force through a busy intersection. If something went wrong here it was an instant Game Over, not going full risk was not an option either, then your target gets away. However, this was only the beginning of a very long chase, continuing through narrow streets. But sometimes the target would take a different route. So I basically suggested in my guide to play to that point of the mission and just restart until the target takes the different route since it was the way easier option. But I did like the soundtrack of Driv3r, especially the main theme.

Between school and games

Even though I took my craft rather seriously, it stayed more on the level of a hobby at first. I was still in school, attending classes and only writing walkthroughs in my free time. It probably took until 2005 to be a little bit more than just a hobby. But more on that in the next part of this article series.