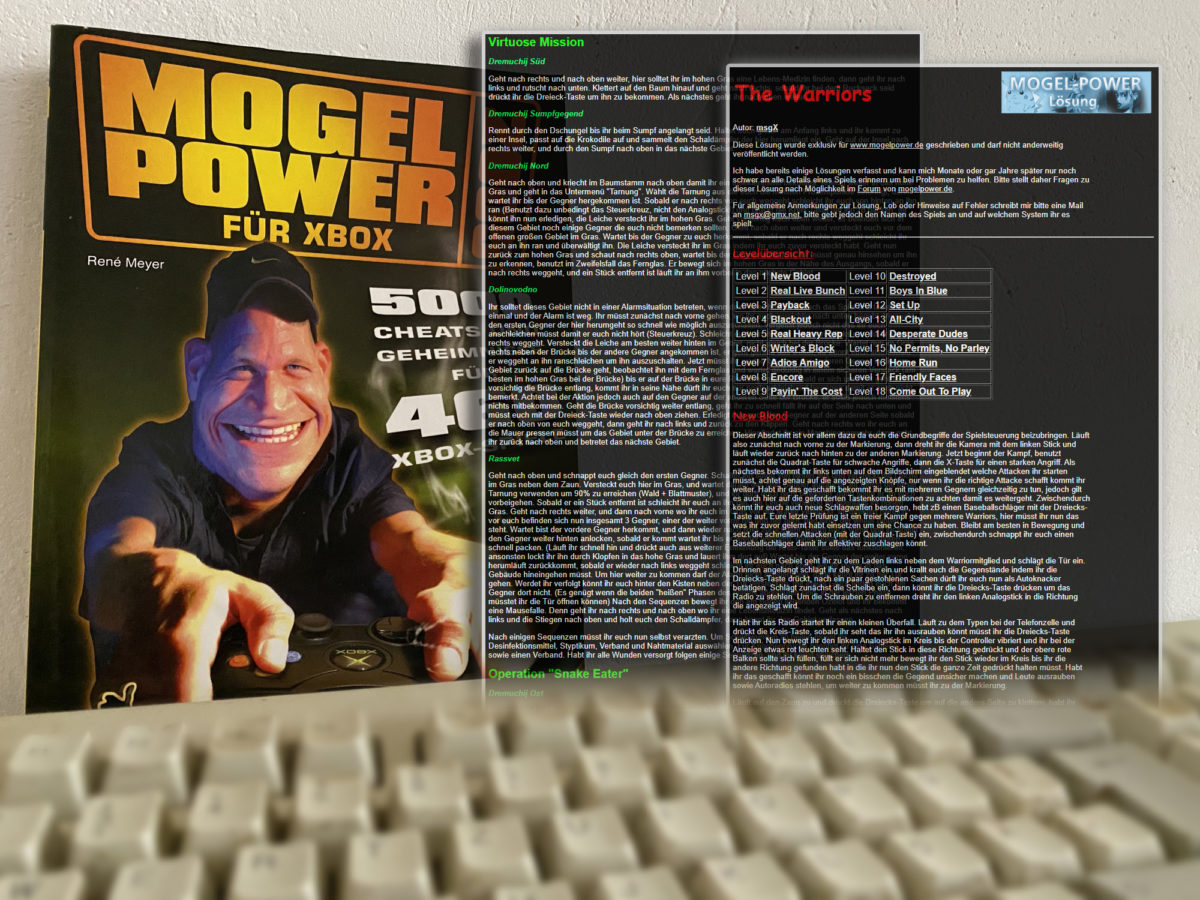 The second part of this article series (you can read up on the first one here) covers 2005. A year that saw the launch of new video game consoles, my first print release of a video game walkthrough, and my first visit to the Games Convention.

But 2005 also marked my final year in school, so whilst learning for my graduation I also published over 20 walkthroughs that year. In this article, I want to cover a few of my personal highlights, some of the games that I still look back on.

Metal Gear Solid(s) or stealthing since 1999

Splinter Cell was not the only stealth game I played, it actually started with the first Metal Gear Solid on the Playstation 1 and I even wrote a short guide for my school paper in 1999. My walkthrough for Metal Gear Solid 2 Substance was probably more of an affair of the heart since the game was already released for quite some time. The guide mainly covers which items the players get in the different areas of the game. It was however not the only Metal Gear Solid guide I wrote that year, another one was for Metal Gear Solid 3: Snake Eater. The game is famous (among other things) for starring a boss fight that players can win by waiting for the boss to die of old age. Speaking of stealth games, of course, not a year went by with another new Splinter Cell game. Already the third game of the series, Splinter Cell Chaos Theory was still very entertaining for me, so I just had to write a walkthrough for it.

After school time with exotic animals

After passing my final school exam, I had a few months off until civilian service. This gave me plenty of time to write new walkthroughs but also covering some rather exotic titles for the Nintendo DS: Electroplankton and Nintendogs. The latter did become a worldwide hit, but the first version of my guide was based on the Japanese version. Nowadays hard to imagine, it was quite common for games to be released months earlier in other regions. The guide was therefore only covering stuff that didn’t require too much language knowledge (e.g. dog commands and competitions), but I did update the walkthrough for the European release later.

Electroplankton was a very fascinating music game, strongly utilizing the touchscreen and microphone of the Nintendo DS. My guide only covers the options on how to control the different planktons and how to make music. That made probably more sense for the Japanese version, but I never thought that the game would be released in western markets.

Releasing something in a print medium was still a big deal back in 2005, or at least it was for me. So of course I was more than happy when my God of War walkthrough was printed in a GamePro Sonderheft. However this was just the start, my main online publisher Mogelpower also released a Cheat book for the Xbox in 2005, which also included 10 of my walkthroughs. At this point, it probably became a little bit more realistic to pursue a carrier in writing walkthroughs, or let’s say writing. Which consequently influenced my choice of studying something in that direction later on.

In August I visited the Games Convention in Leipzig for the first time. It was the year that the PlayStation Portable was released, so that was one of the main attractions of the show. However, the real highlight for me was the opportunity to get an autograph of Hideo Kojima. The Metal Gear creator was at the Games Convention to promote Metal Gear Solid Ac!d and I was lucky enough to get my Metal Gear games signed by him. Back then the Games Convention was relatively new (the 4th one to be more precise) and somewhat less overcrowded as it became later.

Back at home, I continued to write more walkthroughs covering different games and genres. One of the more memorable ones was probably Killer 7. It’s a very unique shooter, using a cell-shading graphic style (it looks like a 3D comic). It was also interesting that you are not able to move freely in the game, the player character runs on fixed routes through the 3D scenarios, switching to the first person when enemies appear. The world and the story of the game were very fascinating starring different characters and bosses. But since then Suda 51 – the main creator behind the game – has a very special place in my heart.

Another somewhat unconventional game was Darkwatch. Starring a wild west scenario, it was an ego-shooter with vampires. Needless to say, the game had a great art design and was something different from the other wild west game released around that time.

Warriors come out to play

The Warriors stands out to me as one of the best movie adaptations, even until today. The game matches perfectly the tone and atmosphere of the movie and further fleshes out its characters. The beginning of the beat ’em up game is set before the 1979 movie, concentrating on the members of the Warriors and the gang, but later it follows almost exactly the plot of the movie (which is admittedly ideally structured for a game). Believe me, the baseball furies are even more disturbing when you have to fight them yourself.

The first new console released in 2005 in Europe was the Playstation Portable, so of course, I also had to write at least one walkthrough for a game on it. MediEvil: Resurrection was entertaining and fun to play and it is a pity that the series didn’t get any new titles until the very recent MediEvil remake. Later that year I also wrote a walkthrough for GTA – Liberty City Stories, which was released for the PSP first. If you like some of the characters of GTA III, can’t get enough of Sopranos or Good Fellas, then that game might be worth looking into.

But 2005 was also the year another console was released, the Xbox 360. Celebrating the new console launch I wrote walkthroughs for Kameo – Elements of Power as well as Perfekt Dark Zero. Those two guides also had something rather special: Screenshots, even though due to some hardware limitations on my side only in a very small format. This was still the time when consoles didn’t include a screenshots function, taking those required extra hardware or a PC equipped with a capture / TV card.

The print release of some of my walkthroughs was a big step forward. It opened the possibility that writing walkthroughs could develop into more than just a hobby, something I will go into more detail in the next part of this article series.